One of the hottest topics around dieting is breakfast. I see so many people struggle with their diet and yet they make all these awful choices of foods that really don’t help them attain their goal. Believe it or not, there are actually people thinking that breakfast is a mandatory meal of the day (God forbid if you want to skip it) and the most healthy choice would be a toast with cheese and turkey, and a glass of orange juice (that’s for getting every vitamin you need, when you only get a small amount of Vitamin C).

Yet day in day out, the scale doesn’t move, the energy levels drop, and everyone goes around wondering what was that they did wrong.

So if you’re reading this and thinking you’re in the same position, don’t worry, we got you covered.Actually, by the end of this article, you will know enough about breakfast that you can brag to all your friends about and actually help them with their diet plan 😉

As a bonus, I include my 2 favorite breakfast meal options. So read on!

Technically speaking it is the first meal of the day. The word is literally referring to “breaking the fast”. The reason we mention this is because you can have “breakfast” any time of the day you want and not just in the morning.

Until the mid 13th century, the morning meal was not the first meal of the day. Actually, people didn’t eat until late afternoon[1]. The word dinner comes from the french word “disner”, which comes from Latin. It means again “break the fast”. It seems like people used to correlate meals with fasting. Or they did a lot of fasting and it was a point of reference.

Anyway, this changed around 13th century where they started eating in the morning as well, and around the 15th century, the word “breakfast” came into use.

There are mentions of early morning meals in earlier times, but it was not a common scenario.

Actually, breakfast used to be a “sin” according to the catholic church.

So despite all that, what is that YOU should do?

Should I eat breakfast?

There is a golden rule for almost all nutritional decisions we are making.

“Pick the option that helps you adhere to your diet, the most.”

I say almost because there are smart-asses everywhere that are stretching this out by thinking this is an excuse to eat anything that has chocolate or sugar in it.

I strictly mean choosing between 2 healthy options that really doesn’t make a whole lot of difference what you choose, in the bigger plan.

As for the Vitamin C, orange juice is rather low than other options:

So the ultimatum is this:

There is a good amount of reason behind this last sentence, so bear with me before you start yelling at your screen.

So when the day starts you have a full tank of willpower (100/100). As the day goes by, activities, people, children, the job, are slowly draining your tank. Around noon, you have like 60 units left. This goes on and around nighttime, there is like 5 or 10 units of willpower left[2].

Now this means you can go hungry in the morning more easily than at night. But why go hungry?

Well, when you need to lose weight, you need to cut back down on calories, as we have probably mentioned a gazillion times in this blog. Eating less than before, usually, means you will be a little hungry at some point. Why not be hungry in the period where you have a full tank on willpower?

Satiety is about being full. Now, which option would make you feel full for a longer period, a 1000 calories meal or a 500-calories one?

The answer is obvious (the 1000 calories meal) but the reason I am saying this, is to refer to the number of meals you should be having. 2 meals of 1000 calories are more filling than 5 meals of 400 calories. So fewer meals seem to be a better option when trying to lose weight.

If you eat the 1000 calorie meal in the morning, you will be hungry around noon or a little bit later. But if you have it around noon, you can stay full until the evening. This is kinda a “trick” to eat fewer meals, hence fewer calories. Remember also that if you get hungry later in the day, you will feel it even more severe, because of the lack of willpower.

Plus, if your stomach is accustomed to periods of fasting (not eating), you’re going to have a harder time eating large amounts of food. Fasting actually conditions our organism on needing less to eat.

Basically, we are trying to find tools to manipulate our caloric intake and fasting in the morning seems to be a good one.

Experimentally, most people will adhere to a caloric deficit better if they skip breakfast.

Things now change in the exact opposite direction when you are trying to gain weight.

Another reason to also separate those calories is that people tend to go nuts when they have a lot of calories to consume. They are using all kinds of sauce and fats in order to reach their target calories in one meal.

Also, when you consume more calories than you expend, you run the possibility of gaining more fat than muscle. So larger meals, are being perceived by our organisms as “too” many calories and to store more of it as fat.

Now don’t get confused that this might happen when you’re consuming fewer calories. The total daily caloric intake is much more important than how many meals you consume.

I hope I made myself clear about the “ultimatum” I gave you some paragraphs ago.

Now let’s get on with my super awesome breakfast choices. Remember you can have them any time of the day you want, but take into consideration your goal.

The reason I have picked created these meals is because they are very fast to make and totally portable. The weird thing is they are actually pretty tasty, despite being composed of only “clean” foods. I don’t like to mix healthy food choices with unhealthy ones, even in small quantities because I tend to have more of the unhealthy ones in the long run.

In addition, these meals have taken into consideration that you need to be heavy on protein and low on calories. A bonus is their fibre amount.

Breakfast Meal #1: Cottage Cheese with All Bran and boiled eggs 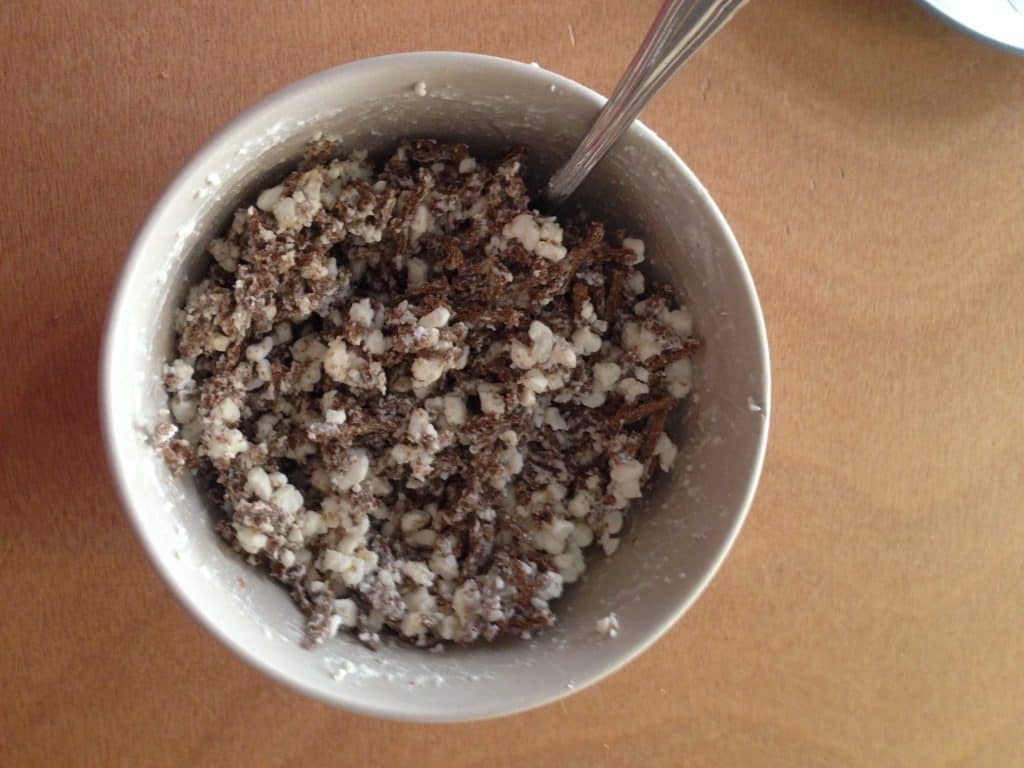 The idea behind this meal occurred to me when I wanted to increase my fiber intake. All Bran seemed like a great choice but I wanted a protein dense choice to pair it with. The cottage and cereal combo was born 😉

If you have boiled eggs in bulk, this breakfast can be eaten right away and it takes only 1-2 mins to actually mix the cottage with the cereal. The eggs are not to be mixed with the cottage. I don’t think it would taste good that way, I prefer to eat them separately. With a pinch of salt, a pinch of ground black pepper and some vinegar.

The eggs may be separate but they are included in the meal, in order to make it more protein dense.

You may think the cottage is awful but the all bran cereal has just enough sugar to make it taste great without really increasing your total carb intake. 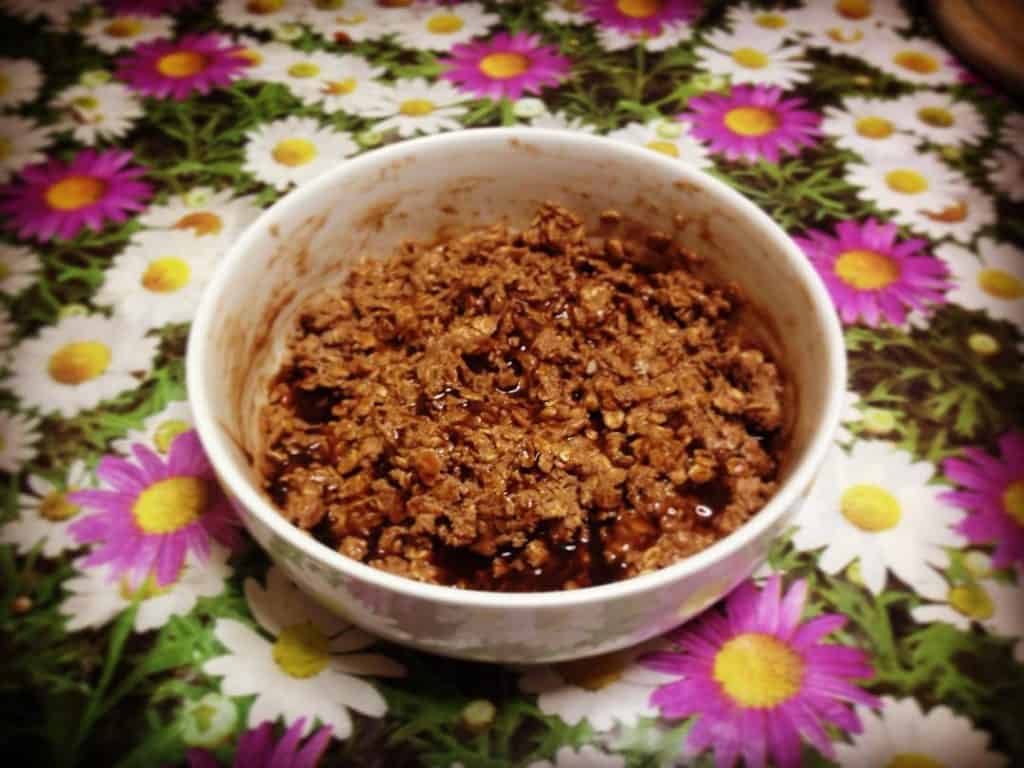 Simple, easiest meal you can have on the run. I used to have it in a shaker and mix the protein powder and the oats with the water. But one day, I found out there is a tastier and more “filling” way to have it.

Mix the protein, the oats, the water and stir. My preferable choice for the water amount is to be just enough to make it a little bit thick. The ratio I use is 125% the weight of the solid ingredients, in water.

Then put it in the microwave oven for 2-3 mins.

You’re going for just a little more solid texture than before. If you let it sit in the oven for more than 3mins, you may make it too thick and solid and make it more like a very big hard cookie, which I don’t suggest.

After it’s ready, you can put some “no calories” syrup on top of it. The most well known are those from Walden Farms, but I use the MyProtein ones. The syrup is not very sweet and it adds just the right amount of moisture in the mix.

If you want to skip it altogether, you can just make the mixture less thick, by keeping it less in the microwave oven.

If you are on the “darker side” and want to increase your calories, my choices would be bananas, honey or a chocolate ganache. I have found that the perfect ganache for this is a 2:1 ratio.

I hope I made things clear for you.

If you have better options or ideas about breakfast, let me know in the comments below.

Macros are the key ingredient to a proper diet plan, period. If you don’t know...